I am a STO Player for a year now, after Xanaeth, a friend (and fellow brony) of mine, convinced me to try it out since I am a Trekkie since my childhood. I liked the game but I was a casual player last year and because I often ended up playing alone I stopped playing. When STO went free to play I gave it another try and thought I could get more into it again, since it was for free anyway now, so I could play whenever I like it without feeling forced to play by a running subscription. But since so many stuff happened and I was convinced I still would play STO in the future I decided to get a lifetime subscription, and so I did. I recently went gold and am excited about getting C-points per month, so I don't have to buy them, I just have to let them stack up...

Also last year in April, Xanaeth and another friend of both of us who shared a flat with Xanaeth invited me for BBQ and the first episode of the then new season of Doctor Who. It was a great day, I had so much fun... Little did I know about what was about to happen. I guess you all might have experienced something similar. I was asked if I knew anything about "My Little Pony" and my response was something alike "That cartoon series for selling toys to little girls from the 80s? I guess that's what I know about that, so yeah, what about it?" I had a strange feeling since Xanaeth already told me snippets about the advent of a new cartoon series that preyed upon various people on the internet and about a particular, strange pink pony who seems to have no regards for physics and common sense... I was certain that we where just about to be introduced to each other and I was absolutely right about that.

I saw the first two episodes that evening and while I was surprised how entertaining they were I didn't even think about the show for almost a week. And still... Now that I knew the main cast of the show I suddenly saw ponies everywhere on the web. I remembered I saw them even before but I didn't recognized them since I didn't knew anything about that show back then. And suddenly there was that feeling that ponies lurked everywhere I was going. What was so special about them? Yeah sure, the show appeared to be entertaining and I understood that Furries might be into it but it enthralled Furries and Non-Furries alike... There must have been more to it. Something I somehow missed. So I decided to try and find out. I searched youtube for a few scenes of that show, scenes from episodes I haven't seen yet and I found the entire first season on youtube... I hesitated for a couple of minutes before I dared to watch the third episode. It was quite funny but still I wasn't sure if I understood the source of that particular magic. There was just one way to find it, I had to watch more episodes.

Before I realized it, I had watched half of the first season almost in a row and wasn't feeling bad about it. On the contrary. While I flinched during the intro song I really enjoyed the proper songs of the show and felt strangely happy about just being able to watch brightly colored ponies spreading love and friendship all across Equestria. Could that have been the secret? A cute show teaching morale and values without preaching using adorable ponies who also happened to be available as toys? Since I watched half of the season without feeling awkward I contently decided to also watch the other half. In the end the finale episode came way to soon and I was glad to have seen the show.

While I enjoyed it and was certain to know why I liked that show, there was still a mystery to me, why worked that magic on so many other people. While I told Xanaeth how I liked the show and found out he himself hasn't seen it in it's entirety I strongly recommended him to do so, since he was the one who introduced me to it in the first place. While he recognized my enthusiasm about the show and started to watch more episodes himself I looked closer into the Brony-Community online. I was overwhelmed by the sheer amount of creative output the community had and before I realized it, I was one of the herd. I thought I was used to that feeling ever since I found the Furries online but it was entirely different. While being a Furry can mean many different things to many different people, being a Brony means something particular to all Bronies, they are all fans of the same show and love it to pieces. And since they were embracing it with open arms I tried that too and succeeded.

Actually I thought it shouldn't feel to different from being a Trekkie, but since I was used to that term since my childhood and Trekkies weren't that special to my surroundings in the past and since Trekkies didn't even need to agree on certain things like which show was the best, they sometimes felt quite distant. And apart from the geek status of most trekkies they were kind of accepted into society. People knew they existed and most people didn't care about it, it was quite easy to be a Trekkie and since they were so commonplace they were noting special in the web either. Furries introduced me into another kind of subculture, a little more shy and secretive since black sheep tended to cast a damning light on the community and vast parts of the internet seemed to be a harsh place for Furries to be... well... Furries. But Bronies, they were so different. Well, partly some of them were similar since some Furries also are Bronies too, but mainly Bronies just admitted to like a show even if they weren't being part of the target audience, were quite casual about that and were cool about anyone who didn't like the show as long as it wasn't a troll flaming around. I like that kind of mindset, the kindness and helpfulness the show has sparked in Bronies towards other Bronies in need who are completely strangers to each other and so many stuff Bronies did in the past like creating their own memes, referencing them and all the interconnectivity and synergy going on between artists, tumblrs, fans and the likes that I honestly think this is the most awesome fandom ever. It's most certainly 20 % cooler than all the other fandoms I have seen so far.

But who I am telling this? I guess you all know how awesome you are!

Sooo... To cut a long story short, I wasn't sure how to call my Odyssey-Class and since I hadn't any particular authentic idea at all I just named her "Celestia". I saw some Bronies before in STO, quickly appearing and vanishing again, so I thought it would be funny to have a pony themed ship so maybe someone might notice it and wondering about it's name, kind of flying around in an insider certainly not everyone would get. Sometimes I also saw other pony themed ships zipping about. I chuckled and wondered myself if they had even noticed me. But there was no reaction so far but for one day...

I just send my duty officers on assignments and left ESD for a moment to fill up the last few slots in space. I barely was a minute out there and was just materialising on the transporter platform of ESD again when Big Macintosh whispered to me asking if my ship was named after a certain princess. I was grinning, someone finally seemed to have noticed. So I answered him that a certain princess might have been an inspiration for that ships name. I guess that answer might have been to vague so he was testing me asking if the name "Fluttershy" might mean something to me. I answered "Yes. Such an adorable, little pony!" I guess that was the answer he was hoping for and offered me a brohoof while inviting me into this fleet.

Sadly I already was in a fleet, but it was a small mostly idle fleet of Xanaeth and me. Basically we just filled the fleetbank with radiation samples and stuff, but that was about it. So I told Xanaeth about that offer and we decided to invite and promote one of his secondary characters into the leader of that fleet. So nothing of value was lost and both of us were free to join this great fleet.

TLDR: I want to thank Big Macintosh / Light Shine for the invitation into this fleet, the extended hoof of friendship and the opportunity to be among fellow Bronies even when playing Star Trek Online. I'm looking forward to awesome pony adventures and shenanigans among the stars...

Right now I have two Characters:
Nash is my FED
Kali is my KDF

Since I previously played rather casually, equipped mostly stuff that looks nice for roleplaying reasons and just recently upgraded to a gold account there is still much room for improvement in terms of gameplay and equipment, but I'm sure I'll improve as time goes by, so please be patient with me, I'm sure it will be worthwhile.

We're so glad to have you! We hope you enjoy the stay, and brony on! 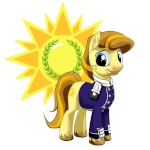