Well, at least on the Forums, anyway.

Anyway, I'll get down to business. I'm @pilotsolaris and I've been playing STO for.... since the beginning of December, I think. So not for very long. I'm also mostly on in the afternoons on School Days (high school... oh how fun

), and I'm on most of the day during breaks and weekends. Anyway, I first came in contact with the Guardians in the Alpha Centauri Sector Block back when I was a member of the Raven Fleet Chapter Guard, and after that I desperately sought you guys out for a long while. And as you've probably guessed, I've been in the Forums for a while, too (well, relatively speaking). Then one fateful day I encountered Kronis, who threw me an invite to the Pony Chat, and it started me on my journey to becoming a Guardian, which happened... yesterday, actually.
TL;DR: I'm @pilotsolaris and I've been playing for less than a month and I'm excited to be here!
Anyhow, enough with how I got here, let me get the basics out of the way.

Some details about me, in real life:
I've been a Brony since 2011. I first encountered the fandom in late 2010 and had negative connotations towards them until I heard about how great the show was and how much stuff the Bronydom had produced, and it got me curious. Pretty soon I was part of the fandom, but I thought I couldn't call myself a Brony because I hadn't watched any of the show, and so, one fateful day, I went onto Youtube and typed in "My Little Pony: Friendship is Magic". The first episode I ever watched of the show was the Pilot, and I have to say that I highly enjoyed it; but it was Fluttershy that really sold it for me. I love being a Brony, and I love the stuff the fandom puts out. My favorite Brony artists are Johnjoseco, Soapie-Solar, and most Pony Vector Artists on deviantART, my favorite Brony musicians are Acoustic Brony, Alex S, Assertive Fluttershy, DJ Twitch, Eurobeat Brony, H8_Seed, Mic the Microphone, Not a Clever Pony, The Living Tombstone, Vinyl Scratch, and WoodenToaster, I've got most of the songs from the show (and most of the BGM, too), I have an OC named Pilot Solaris (he's my profile pic), and Fluttershy is my favorite Pony. I'm also a technical member of the New Lunar Republic.
I have Autism. There. I said it. It's relatively mild and most people don't realize I have it unless I tell them about it, and it's not really bad at all.
I'm also someone who learns quickly. Tell me how to do something and do it right and I'll usually do it that way no matter what happens.
I am also a big/retro gamer. If I'm not playing STO I'm playing Minecraft, TF2, Terraria, Freespace, or something like that.
I'm not just a Brony, either--I'm also a Whovian and a Trekker, and I'm also a fan of Star Wars, Sonic the Hedgehog, Super Mario Bros., a couple of anime, and so on. My favorite show that isn't MLP is Code: Lyoko, and I can honestly say that I'm excited for Evolution.
I'm also a member of the TVTropes community, or a Troper in their lexicon.
Finally, I am AMBITIOIUS. I've got multiple plans for the future concerning the Bronydom, including at least two crossover series, one that's MLP with Freespace, and another that's MLP with Code: Lyoko. I've also got plans for an AMV of Awoken featuring RED from TF2 breaking out of the Rainbow Factory (and a whole arc of AMVs concerning their shenanigans in Cloudsdale culminating in the Awoken AMV, to be made with Source Filmmaker) and an AMV of Babs Seed featuring RED Scout, RED Engineer, and RED Spy from TF2 called "BLU Team", and plenty of other things. If only I'd get around to actually DOING them....
TL;DR: I'm a Brony and I love the fandom, I'm autistic, I learn quickly, I'm a retro gamer, and I'm ambitious.

Some details about my STO Character, Jonathan Solaris O'Sullivan (John for short):
John is now a Vice Admiral! *w00t* Anyway, John is a Human Federation Tactical Officer who was raised on Starbase 110 in 25 Peresi, and his father is a Starfleet captain. His older brother wanted to be a Starfleet officer, too, but then the Borg attacked and assimilated him and his sisters. John, his parents, and his younger brother were the only ones in his family to escape and they and the other survivors were all relocated to Vulcan, where he swore revenge on the Borg for what they did. The Vulcans helped him control his emotions and encouraged him to go to Starfleet Academy. His current Bridge Officers are Anthi Remial D'lan, an Andorian Tactical Officer, Jhros B'hyv, an Andorian Engineering Officer, Blelutrura Almari, a Ferengi Engineering Officer, Teenam Aria Montin, a Saurian Tactical Officer, and Yooti Bunjuz, a Bajoran Science Officer. And as you might have guessed, John's quite the greenie!

And there you have it. I'm glad to be a part of this group and I'm excited to begin a new adventure! 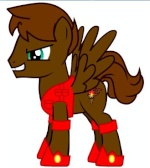 Thanks! Good to be here!