The red alert lights illuminated the bridge in a crimson glow, flashing in time to the alarm. the Vulcan crew showed no signs of
emotion as on the view screen a Klingon ship lunged towards them firing off a photon torpedo as it passed overhead. the torpedo hit the U.S.S. Fluttershy, causing the ship to rock with the force of the impact.

"Report." Captain Leelay said to her tactical officer Sbac, who was standing at his console behind her command chair.

"Sbac, get ready to launch a volley of torpedoes on my mark." Leelay stood up and walked three steps towards the view screen. she waited untill the Klingon ship turned around to face them. and right before it was ready to attack.

"Mark." the viewscreen was lit from the glow of the Fluttershy's own torpedoes as they streaked out towards the Klingon ship.
"Direct hit." Sbac said. " there Shields are down."

"good work. Stur, launch the viral matrix." she told her engineer who was sitting at the forward station.

"aye captain." Stur said. his hands dancing across the computer keys. a blue light shot out from the Fluttershy and
impacted the Klingon ship engulfing it in a aura of energy. Almost instantly its systems began to shut down causing it to slow and drift aimlessly in space.

"open communications." she told Sbac. "this is captain Leelay of the Federation starship Fluttershy. you will surrender
and prepare to be..." but she never could finish her words, for in that moment the Klingon ship exploded in a violent ball of fire

"What happened?" leelay asked. Calling upon all her Vulcan training to keep her emotions in check. "Report."

"It appears that the Klingons use their self destruct." Sbac said. "Obviously they preferred death over being captured.
A very illogical decision.

"I see." leelay said. she looked around the bridge at her crew. her Vulcan crew. Each one showing no signs of emotion.
Sbac, tall and muscular, a unusual trait for a Vulcan but perfect for his position as chief of security. her engineer Stur. his dark skin giving him a exotic appearance. her first officer Stonn, who was looking at his computer monitor. Evaluating the damage and injury reports. Injuries that would be tended by T'ril her medical officer who was now down in sick bay.

"war is never logical." leelay said. "I will be in my ready room making the report to Starfleet. Helm, set course to Starbase K-7 for repairs. Stonn, you have the bridge.

"aye captain" Stonn said, looking up from his computer screen.

Leelay walked to her ready room at the back of the bridge. The doors opened automatically at her approach and closed as she walked through.

"war." she said to the emptiness of the room. "is never logical."

Glad to have you with us. Here's a pony to take with you on your trips around the galaxy. 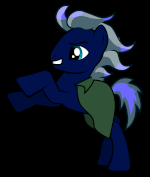